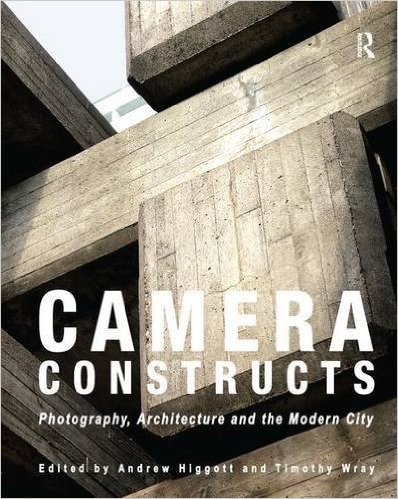 This book collects together twenty-three essays by a wide range of historians and theorists, grouped under the themes of ‘Modernism and the Published Photograph’, ‘Architecture and the City Re-imagined’, ‘Interpretative Constructs’ and ‘Photography in Design Practices’. This is a detailed and engaging anthology, writes Kerry Purcell.

When, in 1826, Joseph Nicéphore Niépce created a crude camera obscura in a studio housed in the family’s country home Le Gras, and placed a bitumen-coated plate within it, the famously etched view that resulted was of the surrounding rooftops as seen through a small window. The crude impressionistic image reveals a series of grainy rectangles, lines, and diffuse objects, intersecting or receding into the distance. Many of the buildings pictured have long been destroyed, but while Niépce’s invention (known as the heliograph) was rejected by the Royal Society, we can see how, from its first faltering steps, photography and the built environment have been intrinsically linked.

Over the succeeding decades, architecture has by turns played a series of roles, often moving from repertory extra to centre stage. For example, in the work of photographer and social reformer Jacob Riis, images of dark squalid alleyways and overcrowded tenements of late 19th century Lower Manhattan slums served to frame the abject poverty that many immigrants were forced endure, pictures that eventually contributed to calls for large scale urban renovation. From that, it is only a few a decades until we see buildings advanced as showpieces of a new aesthetic vision, heroic characters in a narrative that spoke of constructing the world anew from the ashes of World War 1. In the work of Bauhausler designer-photographers such as Lászlo Moholy Nagy, the much photographed Dessau student accommodation served as a visual shorthand for the way in which, as Mies van der Rohe famously noted in his 1924 essay ‘Architecture and the times’, ‘the will of the epoch is translated into space’.

It is this latter union of photography and architecture that serves as one of the dominant themes in the anthology The Camera Constructs: Photography, Architecture and the Modern City. As the editors Andrew Higgott and Timothy Wray pinpoint in their introduction, while it could be said that the urban environment has served as a form of visual noise throughout the history of photography, the focus of this volume is how the representation of the city and individual buildings, both imagined and real, have often given rise to a codified visual language that in its hegemonic dominance needs to be both explored and challenged. It is a form recognisable to anyone who has ever leafed through an architecture/design magazine or glanced at the photographs in an estate agent’s window, a prescriptive approach in which the building is seen in a

‘dynamic wide-angle three-quarter views to emphasize a building’s spatial massing; usually photographing in sunlight such that the light and shadows emphasize volumetric form, or at dusk to allow lit interiors and exterior features to register simultaneously on film that cannot accommodate the full tonal range of bright sunlight and shadows; and parallax correction so that straight edges do not appear to curve in the image as a result of lens distortion’ (p.7).

One of the recurring themes of the book is how this narrow focus on the formal elements of a building has given rise to an aesthetization that forecloses any possible engagements with a building’s localized uses or applications. It is the familiar story of the decoupling of the political ambitions of modernism’s early pioneers from the radical aesthetic experiments they pioneered. In the form of graphic design – an area the book is largely silent about, which is strange considering that many of the photographs of buildings appeared in magazines and periodicals that were part of a more general experimental union of type and image – the use of photography served as the advance guard of this process of political neutralization. This is something the editors acknowledge with their reference to Walter Benjamin’s much quoted (albeit one he took from Brecht) statement that ‘the simple ‘reproduction of reality’ says less than ever about that reality. A photograph of the Krupp works or the AEG reveals almost nothing about [the Nazi history of] these institutions. Reality as such has slipped into the domain of the functional.’ As we now know, this transformation of the universal aspirations of modernist aesthetics into a design language shorn of its radical aspirations dovetailed perfectly with the equally totalizing aspirations of post-WWII corporate globalisation. The authors make the link clear – although they do often pull-back from naming names, the word ‘capitalism’ does not appear in the book’s index, although Country Life does – that architectural photography hastened the easy transposition of the International Style from one country to another, or, as they note, a building was “imported from France to Brazil as cleanly as cutting a photograph from one context and pasting it into another” (p.2). The problem is that the architectural world has now changed, while these specific forms of architectural representation have not.

As Gaston Bachelard recognised in his pioneering book The Poetics of Space (1958), the way we actually encounter the built environment is not one purely determined by the rational management of space, movement and light. The role of imagination and memory is just as important in explorations of architecture and image. In this regard, of all the essays in the book, one of the most engaging is ‘Haunted Halls of Mirrors: Photography and the Phenomenology of Emotional Space’ by co-editor Wray. As Wray notes, ‘architecture…belongs to a wider investigation into place and our emotional engagement with it…implying that there is no singular perfect view of it, that it has no ideal time, is never definitive” (p.105). Although Wray does not touch on this, such a way of viewing the individuals relationship to architectural space has been central to the recent growth in the use of GoPro cameras and the interrogation, or ‘place hacking’, of the urban environment. Still and moving images of the urban space move across platforms, from screen grabs to gifs to vines and back again; they are used to challenge the continuing commodification of public space, but also by the state to track and monitor. Wray notes that the “disjunction between reality perceived by the eyes and as shown by the camera” was something exploited by surrealism (p.107). And this slippage between the symbolic fictions of the photographic construct and the real it serves to trace continues to offer a productive gap in which we can challenge the banal functionality of urban spaces, find ‘Sous les pavés, la plage!’

But, as noted, the divisions between still and moving image are fading, and although the Camera Constructs is a detailed and engaging anthology, with its gaze trained firmly on the history and role of the still image in architecture, it is a book that feels like a historical full-stop.

Kerry William Purcell is Senior Lecturer in Design History at University of Hertfordshire. He is the author of books on the art director and designer Alexey Brodovitch (Phaidon, 2011), the photographer Weegee (Phaidon, 2004), and the Swiss graphic designer Josef Muller-Brockmann (Phaidon, 2006), and co-editor of The Phaidon Archive of Graphic Design (Phaidon, 2012). His current research is looking at the application of the work of French Philosopher Alain Badiou to the areas of design and photography.