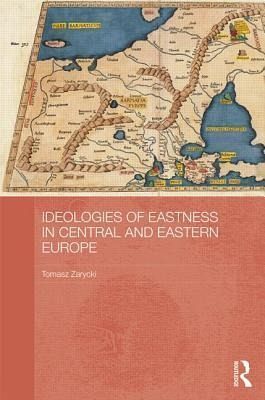 The "semi-periphery" as object and producer of orientalist discourse

Tomasz Zarycki’s interdisciplinary study investigates constructions of "Eastness" across Central and Eastern Europe, focusing on Poland and its elites. The country is framed as both an object and producer of orientalizing discourses. The book, incorporating multiple disciplinary approaches, including sociology, politics, geography and history, becomes a work of cultural studies as it applies postcolonial theory to this "semi-peripheral" region. What emerges is a wide-ranging investigation of the effects of "ideologies" of Eastness, with findings spanning macro-level economic consequences through to the micro-level transformation of local identity constructions.

Ideologies of Eastness is the first English-language book-length publication of Warsaw University professor and director of the Institute for Social Studies Tomasz Zarycki. This volume – the 96th in the British Association for Slavonic and East European Studies (BASEES)/Routledge Series on Russian and Eastern European Studies – synthesizes the author’s interests in centre-periphery relations, the role of the intelligentsia, and the potential in applying postcolonial theory to Central and Eastern Europe (CEE). Most evidently, though, he adapts concepts from postcolonial theory’s forerunners, including Edward Said’s Orientalism and Frantz Fanon’s critique of dependency. Pierre Bourdieu’s sociology, particularly his typology of capital and field concept, shapes his methodology. While showcasing Zarycki’s multi- and, indeed, interdisciplinary interests, Ideologies of Eastness also offers English-speaking readers critical insight into crucial debates in CEE, but above all in Poland, on orientalizing discourses' legacies, transformations and continuities.

In exploring scholarship and public discourse, Zarycki argues that CEE countries are "a locus of intensive production of orientalist discourses." (p. 1) Ideologies of Eastness thus shifts from the typical perspective of this "semi-peripheral" region (p. 3) as "a victim of external orientalization" (p. 1). As Zarycki’s critique of Ewa M. Thompson’s Imperial Knowledge (Westport: Greenwood Press, 2000) in chapter five shows, some Polish scholars – at home and abroad – applied postcolonial theory to reinscribe cultural memory’s paradigmatic victim narrative. Stressing instead the historicity of relations of culture and power, Zarycki highlights how orientalizing ideologies function at various levels. These range from the macro imaginary of the East/West binary and its economic consequences, through intra-CEE relations, to relations between particular states’ perceived centres and peripheries.

The book’s ambitious spatial scope also proves its central drawback. And this shortcoming is by no means unique to Zarycki’s interdisciplinary work but concerns the validity of the comparative venture of area studies. Can CEE provide the object of investigation without implicitly othering this space and implying cultural, social and political homogeneity? These questions become particularly pertinent in reading Ideologies of Eastness as Zarycki believes "Polish discourses of Eastness" can be used "to show the wider context of these discoursive [sic] structures and to locate them within the structures of Central and Eastern European hierarchies of power" (p. 2). Zarycki’s Polonocentric perspective might thus reproduce the “hierarchization of national cultures” (p. 6) critiqued through his Bourdieu-influenced study of the "peripheral field of power" (p. 2).

Chapter one’s concise introduction poses the work’s central question: how "to understand the mechanisms which stand behind the discoursive [sic] stigmatization" of CEE, where ideologies of Eastness "reproduce orientalist schemes". (p. 1) He applies "critical discourse analysis [as] my key tool of analysis" (p. 14) in investigating two central "doxa" of ideological (re)production, namely the "dependence doxa" and the "intelligentsia doxa". Developed "[i]n the Polish case" (p. 2), Chapter two shows their application to a CEE problematically divided into three zones. The first includes explicitly only Poland and Hungary. Zone two, featuring Belarus and Ukraine, is the "transitional sector" between the EU and Russia, which alone forms zone three (p. 18-19). The Baltic states are between zones one and two, with Zarycki classifying states according to their position relative to the dominant poles of the East (Russia) and West (the EU). There is, however, no rationalization of the book’s geographical scope. While apparently exploring "countries of Eastern Europe which were formerly part of the Soviet bloc" (Back cover), there are striking absences, particularly the Czech Republic and Slovakia.

Chapter three outlines how the "dependence doxa" is reproduced in discursive fields of power serving the hegemony of "global Western structures" thus preventing criticism of (p. 31) "dependence on the Western core" (p. 33). Zarycki argues that in the "intertwining of economic and cultural hierarchies" (p. 36), local elites internalize the "symbolic domination" (p. 43) of peripheral regions, thus preserving Europe’s binary "spatial structures" (p. 41), i.e. naturalized division between "progress and backwardness" (p. 32). The bind reinforcing symbolic and economic dependence is compounded by the "intelligentsia doxa", explicated in chapter four. Zarycki insightfully historicizes the intelligentsia’s oft-overlooked domination of the field of discourse and power in the region. However, his model is based in a problematic binary of "liberals" and "conservatives" applied uniformly to "zone one". Empirical application of the model is insufficient, but Zarycki’s doxa concepts and dependence model could prove fruitful if tested by further research.

The remaining chapters are more convincing, as they explore the cultural history and present effects of (self-)orientalization in CEE, or rather Poland. Chapter 5 analyses existing scholarly uses of postcolonial theory, highlighting its translation through encounters with the "semi-periphery", particularly Poland’s Kresy discourse on the pre-war eastern borderlands. This is the focus of chapter 6 where Zarycki follows Daniel Beauvois and Jan Sowa in questioning homogenizing narratives of "Europe" based on modernity and nation-building. These, he argues, were also central to Polish orientalizing claims justifying "velvet colonization" (Fiut; p. 119) of the borderlands. Equally, the liberal ideal of a penitent borderland’s narrative derived from the thought of Jerzy Giedroyc is read for its dual orientalizing/dependency-inducing tendencies as it inspires the "new borderlands discourse" considered in chapter seven.

This draws on "idealistic and highly normative" assumptions of "transparency of borders" and "universal trans-border interaction" (p. 155) which stems from "cultural reductionism, characteristic for most of the intelligentsia-developed identity discourse" (p. 153). Such framing of borders as sites of travel and exchange ignores "power relations and dependencies" and "the relative status of a region in wider spatial hierarchies" (p. 153). Chapter eight emphasizes his critique of idealizing "cultural reductionism", as three cities’ attempts to construct "new identities" (p. 174) through this new hegemonic borderlands discourse are explored. Lublin and Bialystok illustrate the translation of discourses on borderlands into identity claims marketable to the "Western core".  Multiculturalism, the Jewish past and borderland "myths" are all "reinforced by market forces" (p. 218). Meanwhile, dominant memory politics reinforces orientalizing stereotypes of Russian backwardness during the partition-era, which Zarycki’s historical critique challenges (pp. 181-185). Formerly-Habsburg Rzeszów, meanwhile, forms an interesting exception today in its "almost absolute rejection of Eastness" in presenting itself as a modern, technology-based city suited to Western economic demands (p. 226). This, for Zarycki, "may be seen as one of the discoursive recontextualizations of global neo-liberal discourses of power." (p. 164)

Despite their insight, these micro-level case studies cannot justify the author’s claim that "Eastern Poland will serve as the main case study of the mechanisms of the center-periphery dependencies and their symbolic effects on regional level [sic.]." (p. 175). This indicates Zarycki’s struggle to avoid reproducing orientalizing "hierarchies of knowledge" and power. Thus chapter 9 still refracts "Belarussian, Lithuanian and Ukrainian reactions to Polish discourses on the East" through "Polish fields of power and their discourses" (p. 229). The important task of striving for "[i]nclusion of the region in the global archives of knowledge" (pp. 53-57) to potentially disrupt the "Western gaze" and its "hierarchy of knowledge" remains incomplete. The peripheries of the semi-periphery are overlooked. Instead, "discourses of Polish symbolic presence (or even domination) in the east" (p. 257) are often reproduced. Clearly, the unequal authority over representation of (semi-)peripheral spaces perpetuated by academic publishing can be challenged if prestigious Western publishers engage local scholars. Routledge, however, has failed its Polish author with careless editing. Whether perhaps an editor should have intervened to alter the title’s pan-regional claims is another valid question.

Ideologies of Eastness lays important ground, highlighting "fields of power" that produce "recognized modes of discourse and organiz[e] the logic of distribution of not only symbolic, but also political economic resources" (p. 257). It also demonstrates the potential and limits to transferring to CEE dominant modes of critical and postcolonial theory. These instead undergo translation in encounters with the "internal periphery" (p. 2) of a normative 'Europe', often homogenized in global histories and postcolonial studies. Overall, Ideologies of Eastness is a testament to the necessity and ambition of interdisciplinary endeavour, but it is far from the genuinely comparative, regional study promised.

1: Central and Eastern Europe and the idea of the East ... 1

2: Central and Eastern Europe in a center-periphery perspective ... 16

Western hegemony and its naturalization in Central and Eastern Europe ... 32

9: Belarusian, Lithuanian and Ukrainian reactions to Polish discourses on the East ... 229